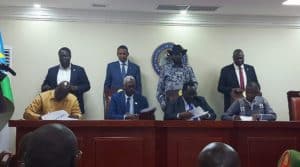 South Sudan’s parties on Sunday April 3rd 2022 signed an agreement on the formation of a unified armed forces command. The deal was reached in Juba following mediation by neighboring country North Sudan. A deadlock between the parties to the South Sudan peace agreement on security arrangements had been holding up the implementation of the 2018 peace deal Tensions between forces loyal to President Salva Kiir, and SPLM/A-IO forces loyal to First Vice President Riek Machar have spiraled recently, triggering fears of a return the country into another war. “It is important that we silence the guns so that South Sudan can prosper…Not everything is perfect but we want to say that we want to move the country forward,” said Minister of Mining, Martin Gama Abucha, who signed the deal on behalf of Machar’s party the SPLM/A-IO. “This is to inform everyone that we have agreed today to unify the military command. We have agreed to divide the positions because peace is precious. We have to agree so that we develop the country,” added Kiir’s national security adviser Tut Gatluak Manime.   The deal sets out terms to integrate opposition commanders into the armed forces. The parties signed a matrix for the creation of a unified armed forces command within a week. They also agreed to graduate and deploy the unified forces in training camps within a period not exceeding two months. The parties also agreed on a regular mee   ting between President Kiir and his five deputies to build trust among the parties. 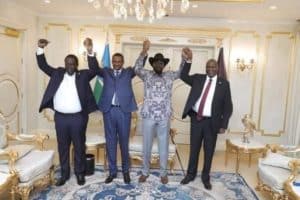 *The summary translation for the agreement reached by the parties for command structure of the unified forces.* 1.Appointment of the opposition Generals into unified command structure within this week. 2.Graduation of Unified forces within 2 months. 3.Return of the opposition into the mechanisms. 4.Abide by ceasefire and session of hostilities agreements. 5.No party should encourage, facilitates or motivate the defections to either sides. 6. Immediate cease of media propaganda and hostilities. 7.Prepared for phase 2 within one month. 8.Building of trust among the Presidency.