One upon a time there was Pankocgok was dry and barren much of the time. Following his natural instincts to find water and grass, Mabior Tiok, left Pankocgok one day and he found the fertile grazing lands of Lou. Lou is named after the predominant bamboo tree that grows over much of the area. Mabior Tiok spent seven days grazing in Lou. He ate contentedly on the healthy grass. He satisfied his own hunger while determining whether the grass was edible for other cows.  When he had eaten his fill, he collected the tall grass with his horns. He returned to

Pankocgok with grass streaming from each horn, as if presenting a gift to the other cows in his herd at home. Tiok had been worried about the bull while he was gone for seven days. The bull was very close to Tiok, however, and when he returned with the straw on his horns, Tiok saw this as a gesture of devotion to the herd as well as a sign that a good source of food was available somewhere in the area. Tiok was curious about where the bull had been. He began watching the bull carefully over the next few days. When the bull left the herd again, Tiok followed his bull secretly to observe his journey. The bull led him to Lou. When Tiok saw the fertile land of Lou, he decided immediately to move his herd and extended family to Lou. In Lou Tiok found the two old men, Chuijek and Cheirbek. Tiok asked them, “Are you the ones who lives here? Is this your land?” Chuijek and Cheirbek replied, “No. We just found this land as we were traveling in the area.” Tiok said, “My bull has led me here. He has been disappearing for several days at a time. He always returns with straw on his horns to give to the other cattle at home. I would like to move here with my family.” Tiok knew that it would be difficult to build houses for his people in this place called Lou. The bamboo had grown very thick, and it was impossible to clear land for houses. Tiok said, “God, make these trees leave this land so my people can live here where the cattle can graze.” Soon after, the bamboo trees (lou) dried up, and a fire broke out. In no time, the trees were burned to the ground. The miracle had created a clearing large enough for houses, and where the trees had been, rich grass for the cattle began to grow. The area is named Loun-Tiok. They also call it Pandit-Lou. Tiok began dividing the area into villages. He gave Pajaak people the villages called Deertiok, Pagrau, Majok-Chedhiop, Tinagaw; Deertiok is the place where Tiok constructed his first compound. Deertiok and Pagrau are close together on the banks of the river.

One upon a time there was a big snake called Ngul who eat people between cattle camp and villages in Yitol district. A cattle camp called Alaol was well known in Dinka Yirol because it has river, and good land for the cattle and people. Also it has good grass for the cattle to eat so many villages around Yirol areas will bring their cattle over there to stay. Many people traveling from villages to Alaol, and from Alaol to villages because people in the cattle camp could go back home and visited their family, and people in villages could came to the cattle camp to bring food their relative who stayed with cattle. On the way back to village, this huge snake he will open his mouth very wired by put one lip on the ground and other one on above sky. When people traveled on that road, people walk inside the snake because they could not see anything because snake opens his mouth very big. When snake full he will close his mouth, but people inside his stomach will not get out unit they die. People who leave the village and they are going to the cattle camp will lost on the way and the same people who leave cattle camp and they are going to the villages they will lost on the way. People in the villages think that their relatives or friends are in the cattle camp, and people in cattle camp think that this people are in villages, but they didn’t know that something happen on their way home. Around one hundred fifty to two hundred people lost every year and people didn’t know where they when.  There was a widow woman who her husband taken by this big snake. Her husband left her while she was pregnant twins. She give birth two boys, and their name were Ngor, and Madit. While they grown 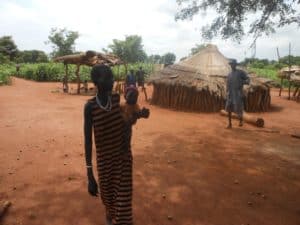 up, they asked their mother where is our father? Their mother told them your father has been eating by a big wild snake that killed people every year. She told them that your father was taken cows in to Cattle camp, but he didn’t returned back home. These twins they were reach age of 14, and they told their mother that they are going to cattle camp, but their mother refusal that you are not going because she thought that she gotten lost them like their father. They boys didn’t listened to their mother, and they took their cows and hit the road to cattle camp.  When they arrived where the snake was, they went inside the snake and started cutting snake. While they cutting him, the snake could not feel anything to his body because he was too big. They reached into his heart and snake feeling something hurting and he jump up and down, but they twin brother’s still cutting unity they reach to his tail. They people and the animals were in the snake some of them were alive and others were dead. The area that snake got killed in was turned into river. These stories are very important in our tribes because telling us the bad and good things happen a long time ago.[/vc_column_text][/vc_column][/vc_row]